Last week I rekindled my love affair with the word “paradox”, so expect to see it pop up here a lot, including in this week’s Broadsheet column where I look at the paradox of Fianna Fáil’s poll ratings remaining stubbornly low, while the approval ratings of its leader move up. Has An Taoiseach, Micheál Martin learned how to disassociate himself from his party… and doesn’t this mean that what is in his interest, is not in his party’s.. and vice-versa?

Though I probably keep this fact well hidden from readers, I really try to not write about polling too often. I say this through clenched fingers as I know it must seem that I have written about little else over the past few weeks and months.

It is a fair criticism to say that political pundits talk and write excessively about polling in the guise of political analysis. While the soap opera aspects of politics, who’s in, who’s out, who’s politically in bed with whom, does help liven up what can often be a dull area, the focus should be on the policies and the decisions rather than who makes them.

The old Heisenberg uncertainty/indeterminacy principle applies to politics as much as it does to physics. If you cannot accurately measure both the position and the velocity of an object simultaneously, then you should focus more on the  trajectory of an object or an idea than analysing snapshots of where it was a few days or weeks ago.

All of which is a long-winded way of me explaining/excusing – why I am once again talking about polling. In my defence, I do this as there is something that is worth discussing in the two most recent opinion polls: yesterday’s Ireland Thinks/Irish Mail on Sunday one and last week’s Irish Times/IPSOS/MRBI, as they offer some contradictory results.

Before we turn to the narrow, but important, area of contradiction let’s quickly deal with the many areas on which they agree. They both show the three main parties in the same relative order. Sinn Féin first, Fine Gael in second place followed by Fianna Fáil in third place.

So, it is the degree to which Fianna Fáil is out of the game on which the two polls disagree. The Irish Times says it is 11pts off the lead, the Irish Mail on Sunday says 17pts.

In the greater scheme of things this is not a major point of contention, unless you are worried by the prospect of a decade of vapid, binary, and polarised Fine Gael versus Sinn Féin politics and care about the prospects of a once great progressive and centrist party. And, although I am no longer a member, I do care.

So, why was the Martin-ite faction of Fianna Fáil popping champagne corks and putting out the bunting after last Wednesday’s Irish Times poll? and Thursday?

Whether your horse comes in 11 minutes or 17 minutes after the winner, doesn’t change the fact that you are double digits off the pace and have gone from coming a poor second (in terms of #GE2020 votes) to coming third consistently, in under a year and a half

Has the Martin leadership so dulled and becalmed the political sensibilities and expectations of the Fianna Fáil party that coming third in a three-hose race, but by less than you do in other polls, is an achievement to be celebrated?

To be fair to the Martin-ites they can point to the Irish Times saying that Fianna Fáil has regained a chunk of the support that Martin lost for the party, by going so easily into government with Fine Gael this time last year.

But their joy at this pyrrhic win has been dulled by yesterday’s Mail on Sunday poll which says they haven’t regained ground. So which is it? Perhaps next week’s Sunday Business Post/Red C poll will throw some light on this issue.

For the record, my own view is that Fianna Fáil is not quite as low as 15%. It quite possibly could be on 16, 17, or even 18% nationally right now. But even if it is, the party has lost support across the country, and most especially in Dublin. I fear that one more year of directionless leadership will see it drop further back.

Even the more optimistic Irish Times poll finds that Fianna Fáil in in fifth (5th) place in the Capital among voters under 35. Their poll results put it almost 30pts behind Sinn Féin, 13pts behind Fine Gael and even 9pts behind the Greens.

Anyone in Fianna Fáil who is elated by a poll featuring this particular result either doesn’t understand politics or is exclusively focused on securing their personal position or pension over the next 18 months. To their immense credit there are many Fianna Fáil veterans who do see the warning signs. The misfortune for the party is that none of them are in positions or authority, having been meticulously marginalised by the leadership.

Speaking of leadership, one other point on which most recent polls have been united is on the increasing personal popularity of An Taoiseach, Micheál Martin.

The fact that his improved performance ratings are not converting into increased support for his party is not a new phenomenon. Research here, but more especially in the UK, shows that a party leaders’ approval ratings tend to fluctuate far more dramatically than that parties’ vote share.

The gap between his personal approval his rating and his party’s may be due to putative Fine Gael voters looking at Micheál Martin and thinking, yeah, he’s doing a decent job as Taoiseach in leading a government that pursues the kind of minimalist government approach we like.

They may well perceive him as impartial, non-partisan, even as politically non-threatening. But none feel this to such a degree that they would dare consider voting for his party, Fianna Fáil.

Martin’s personal popularity does suggest that he has been particularly adept at disassociating himself from his party. Even as I type this, I know it is an unfair characterisation… though it may be an accusation that has occurred to the Fianna Fáil leader.

He has been far more assiduous than other party leaders in going out canvassing in the by-election. Martin has been to the fore in identifying clearly with his party’s candidate, Cllr Deirdre Conroy, in party videos and on out on the streets.

It is not that he thinks Fianna Fáil can win it. Martin as good as admitted that from the start, but he knows his position in in trouble unless he can move Fianna Fáil out of the doldrums of perpetual third place.

A third place showing in Dublin Bay South would be a Godsend for Martin. As I have discussed elsewhere, the Dublin Bay South race is broadly going the way that both Fine Gael and Sinn Féin had hoped… well… kind of. This was Fine Gael’s seat to lose and right now they are on the cusp of doing that, with Sinn Féin snatching a seat that would never have appeared in a Sinn Féin list of 100 winnable seats three months ago.

Fine Gael’s preferred candidate will need every transfer he can get to hold on to this once most bankable of seats, while his colleague, the former Fine Gael TD who narrowly lost the seat last year watches from the side lines, that’s when she isn’t having her photo taken outside her Rathgar pharmacy with the Fianna Fáil leader. 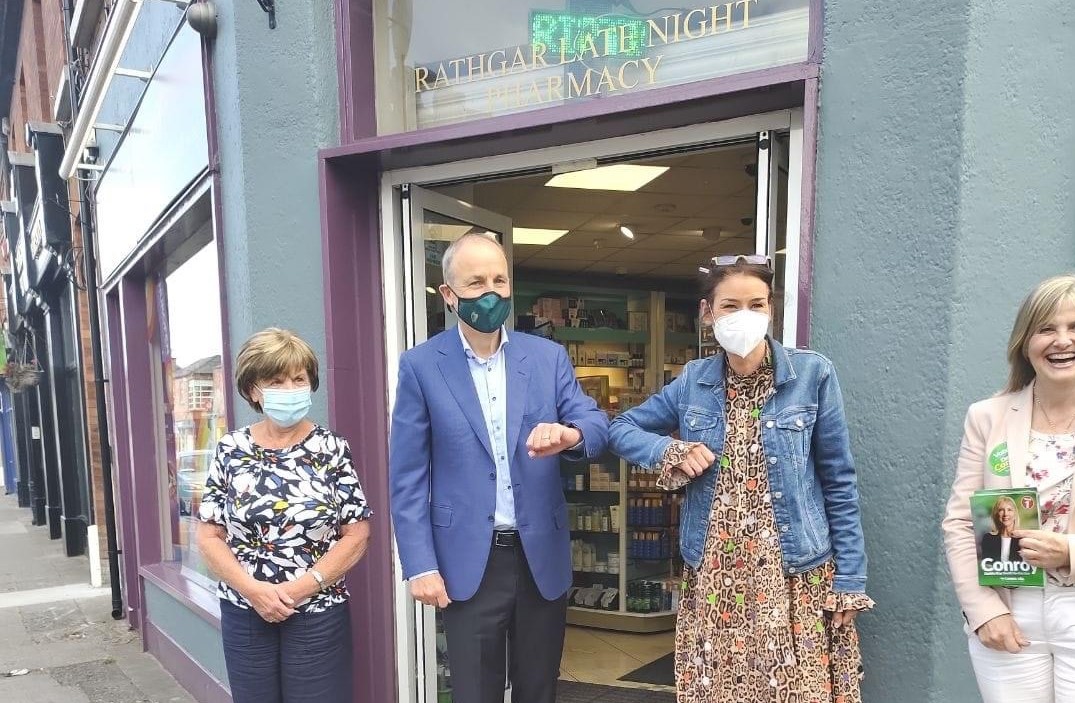 The content, but more importantly the tone, of Leo Varadkar’s Fine Gael Árd Fheis speech hints of a leader who is deeply worried about his party’s declining poll numbers and sees a real prospect of losing Dublin Bay South.

It’s only 16 months since voters told Varadkar that his party has not done enough to tackle the housing crisis. Will those voters be persuaded by his announcement of wanting 40,000 new homes, per year? It is unlikely, especially when the Sunday papers were telling voters that it could be 2025 before the government can meet its existing commitment to build 33,000 new homes per year.

Yesterday’s explanation by Leo Varadkar on the Week in Politics on why his comments on Unity were not out of order, may have helped steer some core Fianna Fáil transfers his way in Dublin Bay South. Now… if only Varadkar could get his candidate to stop driving them away each time he goes on Zoom.

One more point on the Fine Gael Árd Fheis. It was unusual to see the Fine Gael leader get 45 minutes of live TV coverage on Saturday evening during a by-election campaign. Will RTÉ find some way to ensure that the leaders of Sinn Féin, Labour, Greens, Fianna Fáil, Social Democrats, and others, get similar coverage during the by-election period? We shall see.

The word is that Fianna Fáil is planning to hold its Árd Fheis in mid-October and that it will also be a virtual affair, just like Fine Gael’s. This seems an odd decision to take this far out.

In fact, it’s not just odd, it is ominous. Either it points to senior Fianna Fáil figures believing that there will still be Covid restrictions on large gatherings even when everyone is vaccinated, and society has reopened… or… it means the current leadership is less than enthusiastic about having its activists meeting up face to face to discuss how the party is doing.

Either way, this announcement will anger an already irate hospitality sector, who will see the move as a significant vote of no confidence in its future. Surely it was not beyond the small core of officials who run the party to either delay the Árd Fheis until early 2022 or come up with a hybrid model where members could meet regionally, in small safe gatherings, with the big speeches streamed from various locations?

I would be surprised if the leadership is not forced to revisit this decision sooner rather than later. After all, who knows what could happen between now and October?