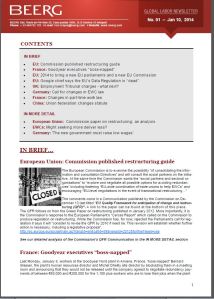 European Union: 2014 to bring a new Parliament and new Commission

Derek Mooney writes: Next May citizens across the 28 EU states will go to the polls to elect the 751 members of the next European Parliament.

Voters across the EU have tended to treat these contests as what political scientists call: “second order” elections. This usually means that voter turnout is lower than in national elections and the campaigns are often fought more on national issues rather than pan European ones. In many cases the results in each country reflect the current standing of the national government more than they do the manifestos of the European groupings.

While voting will take place during a 3 to 4 day period across the 28 member states, we can get a sense of the possible outcomes by looking at opinion polls in the eight largest EU countries (France, Germany, Italy, the Netherlands, Poland, Romania, Spain and the United Kingdom) as these account for around 77% of all the EU citizens entitled to vote and will elect around 64% of the Members of the European Parliament (MEPs).

A policy paper presented to the Notre Europe: Jacques Delors’s Institute focussing on what the political balance of power in the next European Parliament might be suggests the possibility of some major changes.

The paper features an analysis of recent opinion polls in these eight countries. It suggests a swing to the Left and Centre Left as well as major gains for protest and fringe parties on both the far left and far right.

In the outgoing parliament the EPP (Centre Right group) holds 265 seats against 184 for the Social & Democrats (Centre Left). The analysis of the polls suggests a swing to the centre left that not just closes this gap, but even reverses it. Some analysts predict that the EPP group might win 209 seats in May, four less than the S&D’s predicted 213.

The predicted changes on the margins are no less dramatic. The domestic opinion polls in France suggest that the far right Front National, led by Marine Le Pen, could become the largest French party in the elections, possibly taking 21% of the vote and increasing its number of MEPs from 3 to 17. While on the other end of the spectrum far left parties such as the Spanish Izquierda Unida (United Left) may increase its number of MEPs from 1 to 8.

Political commentators are suggesting that these advances by parties on the far left and far right, plus gains by populist protest parties like Italy’s Five Star Movement led by comedian Beppe Grillo could see them holding up to 40% of the seats in the incoming parliament.

The political zero sum gain dictates that the increased influence of these groups comes at the expense of the traditional dominance of big blocs: the EPP, the S&D and the Liberal ALDE group, leading to greater political uncertainty in the next Parliament.

This uncertainty comes at a time when the Lisbon Treaty has given an increased role and say to the European Parliament, not least in the appointment of the next European Commission especially the Commission President, which will follow the European Elections.

The Lisbon Treaty has changed the rules on the appointment of Commission President and these come into effect for the first time in 2014. Article 17 of the Treaty and the Declaration 11 annexed to it set out that the choice of the candidate for the Commission presidency will be made “taking into account the elections to the European Parliament”.

Names are being bandied about as to who might nominated by each of the main groups. The current EU Parliament President, Martin Shultz looks like being the likely nominee of the centre left S&D grouping, having already secured the backing of 20 or so centre left parties across Europe, most importantly his own German SPD and Francoise Hollande’s Socialist Party.

The EPP may opt to propose Jean Claude-Juncker, the recently defeated long serving Luxembourg Premier. Juncker’s gain maybe at the expense of his party colleague, Viviane Reding, who had previously harboured ambitions to become Commission President having served as a Vice President. Realising that that path is now closed there is some suggestion that she may step down as a Commissioner before her term expires to seek re-election as an MEP (she was previously an MEP) and seek the post of President of the Parliament. The same suggestion is being made about her French Commission colleague Michel Barnier.

But, being Europe, the practice looks like it will be very different. While MEPs want to see the power reside with them and the Commission Presidency go to the largest group (or coalition of groups) in the incoming European Parliament, national governments and leaders, most notably Angela Merkel and David Cameron, are deeply reluctant to surrender the final say to the parliament and are taking a very broad view of the phrase “taking into account the elections to the European Parliament”

While no one should be heading to the bookies to put bets on the results just yet, it is reasonable to assume that the incoming European Parliament and Commission with have a more leftish and presumably interventionist hue than the outgoing one. Given the difficulties posed to business by the outgoing centrist parliament, this cannot come as good news to business and employers across the EU.

The prospect of a more leftist Commission and parliament, coupled with the political uncertainty heralded by a phalanx of extremist parties of both left and right, could lead to some interesting and difficult times ahead.