This is my Broadsheet.ie column from August 21, 2017. You can find the original online here 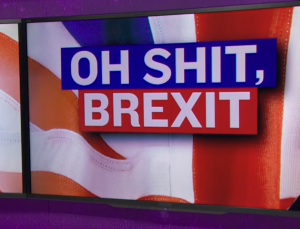 According to its Brexit position papers issued last week, the British Government is absolutely determined to avoid a hard Brexit and is hell bent on making sure that there will be no changes to how the border between the two parts of this island operates.

If only it were true.

It isn’t. As many others have already pointed out, you have barely to scratch the surface of the British government’s argument to quickly realise that its glistening yet imprecise language masks a dark and base core.

Last week’s papers were not about the massive machinery of the British government and civil service setting out its key positions on crucial realities arising from Brexit, but rather they were a crude and infantile political attempt to prepare a platform from where current British Ministers can accuse the EU27 of imposing borders and costs when the inevitable hard Brexit happens.

The former Tory Chancellor, George Osbourne called it right a few months back in a tweet when he predicted that the EU/UK Article 50 negotiations will end in failure in 2019 and that the UK will crash out of the EU with no deal and end up a transitional arrangement that resembles Norway’s.

The UK position papers were not about negotiations or ambitions. They were, almost literally, about positioning.

They were about the current crop of UK Tory Ministers positioning themselves for a hard Brexit – a hard Brexit that will impose a hard border across this island – and then being able to wring their hands afterwards, claiming that this wasn’t what they wanted, and that it is all the fault of the faceless, unelected, bloated bureaucrats in Brussels, aided and abetted by ungrateful Irish politicians

They know that the negotiations are on a collision course. The best deal for Britain is not the best deal for the Tory party. And so, the Tory party’s interests are about to trump the countries, helped along by the fact that the British Labour party is even more paralysed by its divisions on Europe than the Tories.

That is why the UK position papers on the Customs Union and Northern Ireland contradict each other.

It is why they want to confuse and upset the Article 50 negotiations timeline by dragging decisions on Northern Ireland out from the first phase of talks and dragging it into the customs and trade talks, thereby frustrating both.

There was nothing to welcome in last week’s position papers and diplomatic niceties should not prevent us from saying his openly and candidly.

Brexit in any shape or form will cost us, but a hard Brexit will hurt us economically and potentially cause political turmoil by undermining much of the progress made since the Good Friday Agreement; with its dismantling of the border structures and military architecture.

It took decades for us to convince the British that there were no security or military solutions to the political problems associated with partition.

It was a slow and painstaking process that involved the building up of strong personal relationships, most notably between Albert Reynolds and John Major and followed by Bertie Ahern and Tony Blair.

Now Mrs May, and her ministers, are set to turn back the clock for Northern Ireland and this entire island, and all for reasons of Tory party unity.

This time around instead of talking about security solutions they talk about technological solutions – solutions to a problem that had all but disappeared but which their blind intransigence is determined to make reappear.

As I have said here for well over a year: Brexit changes everything on this island – and I do mean everything, not just economics.

Up to now, most of the Irish political talk has been on mitigating the economic damage and cost of Brexit and seeking the opportunities it offers – all that has been fine, if not a little understated at times, but the impact of Brexit goes beyond the economic.

The relationships between these two islands and between the two parts of this island are also about to change: economically, socially and politically… especially politically.

The hard Brexit that Gove, Johnson, Fox, Davis and Hammond are forging is about to make all-island approaches here the only viable ones.

The Brexit vote in the North has changed everything. Despite the consent principles contained within the Good Friday Agreement, the constitutional position of the people of the North, in this case as fully represented EU citizens, is about to change contrary to how a majority voted.

As the SDLP leader Colum Eastwood stated almost exactly one year ago:

“Northern nationalists are once more a restless people. The constitutional accommodation which we voted for by referendum in 1998 has been violated, not by a vote of the people of Northern Ireland, but rather by a vote of others in the UK 18 years later.

The blanket of that constitutional comfort has been abruptly removed. In particular, undermining our connection with the South achieved via common EU membership is not something which can be tolerated.”

It is regrettable that Irish politicians down here – of all hues – have not focussed sufficiently on this theme over the past year. While their attention to some of the finer detail is commendable, that cannot be allowed to come at the price of missing this bigger issue.