This column first appeared on Broadsheet.ie on November 21, 2017 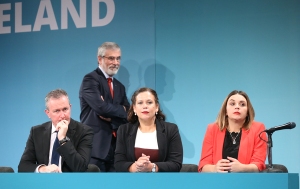 After months of will he, won’t he, Gerry Adams, Irish politics enduring enigma has announced that he plans to shortly stand aside as leader.

Cue the long lap of [dis]honour as his fans hail the great negotiator and peacemaker and his detractors remind them that he was even more responsible for the mayhem and pain that preceded the peace. Yes, he is entitled to top marks for his role in the peace process, but his total score has to be calculated over his whole career, not just the heavily revised latter portion.

Adams’ longevity is due to many factors, not least his enigmatic persona. What we know about Adams is what he wants us to know, whether it is his penchant for writing poetry, his fondness for his teddy bear and crème eggs or his passion for naked trampolining with his dog. The Adams that he would have us know is a mass of contradictions that allows some to project onto him all those talents and skills they would wish to have in a leader.

But the reality is very different. The real Adams is rarely on show, but when it is, it is unpleasant, especially when he does not think he is on the record as with his November 2014 Enniskillen speech or his responses to the provos victims.

It is also easy to seem like a skilled negotiator when you have a band of paramilitaries and a cache of weaponry that others want you to dismantle. Curious how Adams’ abilities as a negotiator have diminished since decommissioning?

Adams standing down as leader should not be confused with him relinquishing the leadership of the provisional movement. Instead, Adams moves from centre stage to behind the curtain, but have no doubt that his control, not to mention that of the others on the Army Council, will not be surrendered just yet.

If you don’t believe me then look at the situation north of the border. There Michelle O’Neill is the de jure leader, but the de facto leader remain Adams. Indeed the early and untimely death of Martin McGuinness allowed Adams and his coterie of old Belfast comrades to increase and strengthen their grip on the organisation in the North. The Northern party, once the bedrock of the Shinners set up, now must play second fiddle to the needs of the organisation in the South.

Michelle O’Neill is no accidental puppet, she was picked specifically for the role as she knew and accepted the limits that would be placed on her. This is not acquiescence, it is the provo-real-politik. She knows who truly runs the show and she is fine with that.

Just as Mary Lou will be fine with a similar situation on this side of the border. Mary Lou does not flatter herself to think that she will actually be anything more than a titular leader who will deal with the minor day-to-day tribulations while Gerry and the lads handle the big stuff, she just hopes we will not realise this – a point I will come back to, shortly.

But moving backstage does not mean that nothing at all will change. With Adams departure the provos lose their biggest celebrity whose draw and pulling power when it comes to media attention and fund raising, should not be underestimated.

While Adams will still exercise leadership over the big policy questions and directions from behind the curtain, the provos will soon feel the loss of his authority and presence when it comes to exercising day-to-day discipline and control.

Answering Mary Lou back will not be as scary and foolhardy a notion as answered Adams would have been. Unlike Adams, Mary Lou cannot invoke the whiff of cordite to engender respect and dominion. The closest Mary Lou has come to cordite is the bang bang chicken in Wongs of Castleknock

She may wish that she had to judge from her eagerness to preside at provo gatherings, but she didn’t. Back in those more troubled and difficult days she eschewed the provo chique was more content in Fianna Fáil in Dublin West. Indeed this, and her wish that she had taken a more central and prominent role in the past which may prove her greatest undoing.

Remember that apparent Dáil dust-up between Mary Lou and the Taoiseach back in September? Most political correspondents saw the row as being provoking by comments made by Leo Varadkar. But they missed the real cause. While Mary Lou’s exit from the Dail chamber may have immediately followed Varadkar’s remarks, they did not cause it.

Fans of the West Wing will recall an early episode entitled Post Hoc, Ergo Propter Hoc loosely translated as: after therefore because of. In the episode Bartlet points out that this is rarely the case in politics that because one action follows another that it was caused by it.

So it is with the Mary Lou dramatic exit. The comments that really got under Mary Lou’s skin came from Micheál Martin in an exchange a few minutes before.

The Toaiseach was answering questions on British-Irish relations in both the context of Brexit and the absence of an Executive in Northern Ireland. Martin referred to his own experience of negotiating with the British when Mary Lou chimed in, the following exchange comes from that day’s Dáil transcript:

Mary Lou McDonald: Deputy Martin’s words demonstrate remarkable ignorance.
Micheál Martin: I have been there. I have been in negotiations with all parties.
McDonald: I have been there with the Deputy.
Martin: Deputy McDonald was not. She was never in negotiations.
McDonald: I have, and I have seen Deputy Martin at close quarters.
Martin: When I was Minister for Foreign Affairs, Deputy McDonald, was nowhere. What tended to happen was that certain people came out for the photo calls. The Deputy was never at negotiations with me or Shaun Woodward. Commitments that were given then were not dealt with or seen through.

My point is that it was not the Taoiseach’s name calling and needling that got under McDonald’s skin, she is far too wilely and experienced to allow something that innocuous to irk her. No, it was Martin disclosing her non-role in the talks and reminding her, publicly, that she has not been the central player she would have others, even within Sinn Féin, imagine her to be.

It was her Achilles heel then and will become a greater vulnerability as leader.