This piece was written for Broadsheet.ie and appeared online on Tuesday May 15th 2018, on the morning after RTÉ One’s Claire Byrne Show debate on the abortion referendum: see HERE. 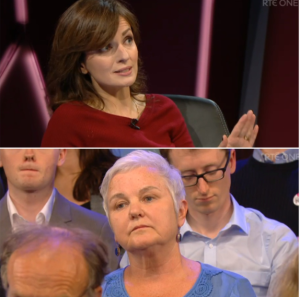 On the morning after the night before’s hyped-up #8thRef Claire Byrne debate: committed Yes campaigners are insisting that the Yes side won it while staunch No activists are declaring with equal ferocity that their side prevailed.

In my own view, neither side significantly moved the dial among undecided voters with the real loser in the whole sorry mess being public sector broadcasting.

This was not the fault of the presenter/moderator Claire Byrne or any of the lead speakers for the Yes or No sides, but of the folk in RTÉ who decided that having daytime TV style confrontation in front of a cheering crowd was the best way to discuss a fraught, complex and emotionally charged issue.

What was needed was a calm, respectful and reflective discussion, in its place we got a he said/she said wall of noise. It needed Jeremy Vine, we got Jeremy Kyle.

All that was missing to make the Jerry Springer Show effect complete were lurid chyrons running across the bottom of the screen screaming the titles of upcoming shows: I get turned on by number 1s, but not number 2s or Spoiler Alert: they’re topping the poll.

Ok, I exaggerate, though the Brid Smith versus Maria Steen encounter (pic), complete with audience boos and hisses, did make me wonder if Steve Wilkos and a team of black t-shirted security staff were waiting just off camera.

So, what was the problem with the format? It was the audience. Not any one individual or even a group of individuals, but rather the constant and incessant cheering and clapping for speakers on their side and the hectoring of those on the other.

No doubt, each side will claim that the other one went further in heckling or shouting down the other, but that doesn’t matter.

Think back to any of the US presidential debates of the last decade or so. In each of them, the moderator has opened proceedings by setting out the debate rules, as decided by the US agency that arranges the debates: The Commission on Presidential Debates.

The host then explains that the audience must remain absolutely silent for the duration of the debate, with the exception of welcoming both candidates out on to the stage, so that people at home can focus on what the candidates are saying.

Opening the second presidential debate of the 2012 campaign between President Obama and Mitt Romney, the moderator CNN’s Candy Crowley, announced that “the audience here in the hall has agreed to be polite and attentive — no cheering or booing or outbursts of any sort.” The format of this debate was what American broadcasters call a town hall. There ordinary voters ask their questions of the candidates directly, but that audience is made up of uncommitted voters chosen by independent pollsters.

Much of last night’s audience were chosen by the two campaigns. Both of whom seemed more interested in getting as many loud and vocal people there as possible.

I know that I am at risk of sounding po-faced, or even hypocritical. I have not been averse, in the past, of doing a bit of fairly boisterous heckling at political discussions – not all of them involving other parties.

Like many politicos of my vintage this also included a few stints in the audience of the grand old dame of Irish TV political debates Questions and Answers.

There I would attempt my faltering impression of an innocent member of the public. It was unconvincing. Indeed, the only thing worse was my dire impression of an electable politician, but we live and learn.

I know that political shows can be boring or tedious and need a bit of showbiz and spectacle from time to time. I realise that listening to a procession of TDs and Senators drone on can be a ratings killer. But going the opposite way is not the answer.

The secret is knowing when the time is right and how far to go. Last night was an example of getting the mix wrong – and it is not the first time.

We saw the same format deployed to equally unsatisfactory effect almost seven years ago in the 2011 presidential election debates – though that night had the added frisson of dodgy tweets.

Surely the only lesson they learned in the intervening time cannot just be: don’t read out the Tweets?

While we do not need to go as far as setting up a dedicated quango dealing with debates, be they presidential, Dáil or referendum along the lines of U.S. Commission on Presidential Debates, the decision on formats should not rest with the broadcasters alone.

There should be a role for an independent electoral commission, charged with overseeing our electoral process.

To be fair, this government is looking at setting up such a commission. The 2016 Programme for Government states:

We believe that Ireland needs an independent electoral commission, as a matter of priority.

The new commission should examine the voter registration process and in particular the possibility of the PPS system being used to automatically add people to the electoral register once they reach voting age. It should also look at ways to increase participation in our political process through voter education and turnout. The new commission could also:

Assume the role of Registrar of political parties

Oversee the Referendum Commission, which would be a sub-section of the commission

The newly established Electoral Commission would be independent of Government and directly accountable to the Oireachtas.

The problem here is that the previous 2011 Programme for Government was also committed to establishing one, saying:

“Our open government legislation will also establish an Electoral Commission to subsume the functions of existing bodies and the Department of the Environment”.

As with many things the promise is there, it’s the action that is missing. The last time the electoral commission issue was raised with Taoiseach in the Dáil appears to have been back in October 2017. Back then he said:

“There is no timeframe for it. It is very much a long-term project.”

Given that this government’s remaining time in office can be best measured in months, not years, we see that 2011 and 2016’s “priority” is today’s: meh, we may get around to it.

To be fair, in the hierarchy of this Government’s broken promises this one does come a fair bit down the list, but that does not excuse its lethargy.

With a little bit of political will and Dáil time the legislation could be processed speedily. A nascent Electoral Commission could be in place for a presidential election later this year.

Much of the preparatory work has already been done. The various reports, consultation and scoping documents are already there. I understand that the Department of Environment has been preparing a Regulatory Impact Analysis for a draft Bill.

The aims and intentions of James Lawless’s Social Media and Transparency Bill could be rolled into it too, so that electoral fairness is not depending on the largesse of the IT giants.

So, what’s the delay? Must we wait for Russian interference to finally act?