This column appeared on Broadsheet.ie on May 21st, just a few days before Limerick, Waterford and Cork cities voted on having directly elected mayors. Only Limerick voted in favour. 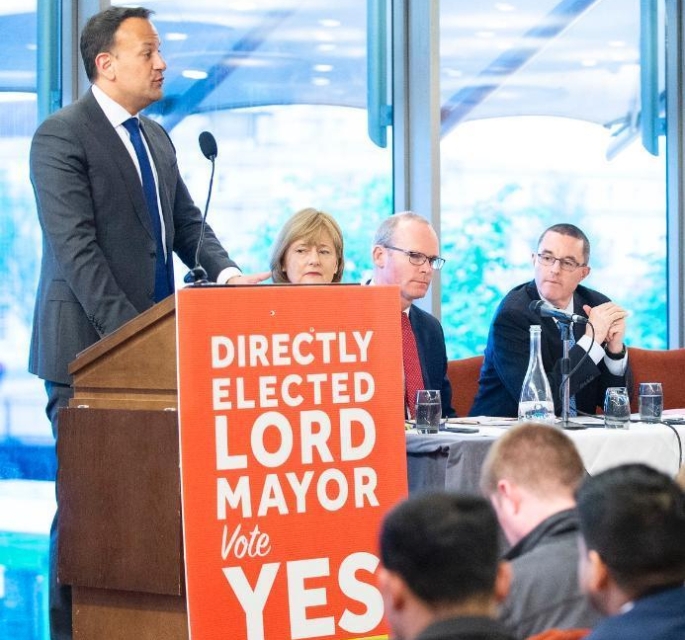 On Thursday voters in Northern Ireland go to the polls to elect three members of the European Parliament. Given the dominance of Sinn Féin and the DUP the focus will be on the contest for the last seat between the SDLP’s Colum Eastwood and Alliance’s Naomi Long. While a win for either will be a win for progressive politics, many at the top of Sinn Féin are hoping Long makes it, though their voters may not agree.

On Friday, voters down here will find themselves confronted by three ballot papers when they get to the polling station.

Not only do we get to choose Ireland’s 13 MEPs (two of whom will sit on the reserve bench until Brexit is resolved) we also get to elect 949 City and County Councillors from the almost 2,000 candidates on offer across the State.

And, as if all that responsibility was not heady enough, most voters (i.e. Irish citizens) will also get a third ballot paper, asking them to approve or reject two specific changes to the constitutional provisions on divorce.

Some very lucky voters will get a fourth ballot paper. These are the voters residing in Limerick, Cork and Waterford, who are eligible to vote in the local elections. They will get to vote in local plebiscites on whether those cities should have directly elected mayors from 2022.

Galway voters were also due to be asked their opinion, but that plan went off the rails late last year when some technical issues about merged council management systems compelled the government to drop it. Compelled is a polite way of saying that Senators, at the behest of Galway’s councillors – also known as Seanad voters – forced the government to back down or be defeated.

Voters in Dublin will probably not get to vote on the issue until 2021 or 2022, as the Government has opted to kick that thorny issue to a Dublin citizens’ assembly, which may be set up before year’s end.

Almost two decades after the first proposal to have a directly elected mayor for Dublin was mooted and this Government is hoping to send it for consultation. Tempus non fugit.

Not that I am complaining about the delay. At least it means that this bad idea is still a distance away from being implemented in Dublin.

My most recent tirade was in the aftermath of the knockdown, drag-out, ego fuelled electoral contest that was the 2018 Irish Presidential election. I warned how we needed to heed the lessons of that election and realise that having an election for an office with a pulpit and a budget, but neither power nor responsibility could descend into a mess.

Before that, in July 2016, I argued that Dublin needs to have powers and responsibilities devolved from central government so we can plan for the future of the city, but that having a directly elected super-mensch was not the answer.

The boundary of the domain of any directly elected Dublin mayor would be the same as the GAA boundary, covering the four existing Dublin local authorities: Dublin City Council, Dun Laoghaire/Rathdown, South County Council and Fingal.

It is a huge population. But just saying it does not adequately convey the scale. Take a look at this 2019 Euro-constituency map of Ireland. The red bit on the right would be the area under the aegis of a directly elected Dublin mayor.

Do you think something on that scale would work politically or administratively?

It would be a recipe for political gridlock with a directly elected Dublin Mayor claiming to speak for about one third of the country, questioning and challenging the policies of the elected government.

The scale is simply too big and too cumbersome for us to go to such a “strong man” model of governance. A situation only exacerbated by the position having relatively little power.

Under the model proposed for Cork, Limerick and Waterford the additional powers and responsibilities that the new directly elected (or executive) mayors would exercise would previously have belonged to the Council Chief Executives (previously called City and County Managers). This FAQ produced by the Department offers some information on the proposal.

Reform of local government should be about the devolution of powers not the maintenance of the local power imbalance. The situation will favour the Customs House as much after any shift to elected mayors as it did in before it.

This proposal is what you do when you want to look like you are reforming sorting rather than actually reforming it.

This view is not eased by how the whole process has been handled in recent weeks and months. While there is http://www.mayors.gov.ie/ URL, it just links to the page on the Departments website and that is hardly designed to entice voters to come and find out more.

While the Taoiseach acknowledged in the Dáil at the end of March that there was an information vacuum and that many voters in the three cities were unaware of what they were being asked to vote on, he still insisted that “eight weeks is enough time”.

With three days to go it looks like his confidence in being able to inform everyone in eight weeks, never mind persuade them, was misplaced.

For the ultimate benefit of the people of Dublin I hope the three cities reject the proposal on Friday and cause the government to think again.

If they accept them, and there could be an interesting dilemma if some cities pass and others reject the proposals, well it is not the end of the world. Local government in all three will continue to function after the first mayors are elected in 2022 just as it had before.

The problem is for Dublin. The city is grinding to a halt. We are pricing new businesses and start-ups out. Dublin has become too expensive to live and work in and too cumbersome to get around by public transport – don’t get me started on the ongoing work of fiction that is Transport for Ireland’s Real Time Passenger Information (RTPI).

Meanwhile, we wait for a meaningful and workable plan for real Dublin city governance that doesn’t look and sound like policy-making by google search.