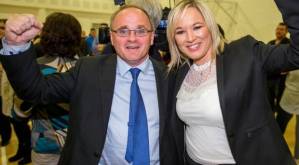 END_OF_DOCUMENT_TOKEN_TO_BE_REPLACED

This is my Broadsheet column from Tuesday last on the fallout from Sinn Féin MP, Barry McElduff’s callous Kingmill video tweet. It was written just before DUP MLA, Christopher Stalford sent out another unwise and insensitive tweet** (since deleted at request of the families of Kingsmill victims)

Precisely how do you suspend an abstentionist MP?

Do you make them show up and take their seat in the House of Commons for 3 months as part of their punishment?

But, as we have learned since Sinn Féin “acted quickly” to deal with Barry McElduff’s tweet mocking the Kingsmill massacre, he will be on full pay while he is suspended from party activities for three months.

It is almost worthy of a Lewis Carroll story. “Acting quickly” means waiting two full days to gauge public reaction and decide what is sufficient to assuage any anger among the middle ground.

“Suspending” means no actual loss of definable privileges for the guilty party, just the appearance of a loss of some non-specified ones.