This column first appeared on Broadsheet.ie on September 20th 2017 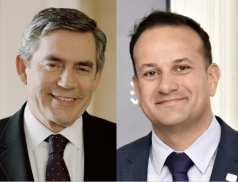 One of my favourite political anecdotes comes from the late Australian Prime Minister Gough Whitlam. Whitlam was on a trip to China to meet the infamous Mao Tse-tung. His officials warned Whitlam that Chairman Mao disliked small talk intensely and advised that he come up with a couple of substantive questions if he wanted to keep the conversation going. Whitlam decided, given that the visit was coming around the tenth anniversary of the assassination of President John F Kennedy, that he would ask Mao to speculate on what might have happened to the world order if Nikita Kruschev had been shot that day instead of Kennedy.

Delighted with the substance and depth of his question he set off to meet Mao and to hear the Chairman’s thoughts on this great “what if”. He sat down with Mao and, after the usual formal introductions, he proceeding to ask his question. The Chairman seemed pensive and intrigued. Then, after a few moments thought, he replied, ‘I don’t think Mr Onassis would have married Mrs Kruschev’.