This column appeared on Broadsheet.ie on October 14th in the aftermath of the Johnson/Varadkar meeting at the Wirral to discuss Brexit. The two men were said to have spoken in private for 90 minutes without officials or advisers present. Did those talks focus on the specific details of the Irish border arrangements or were they more political? 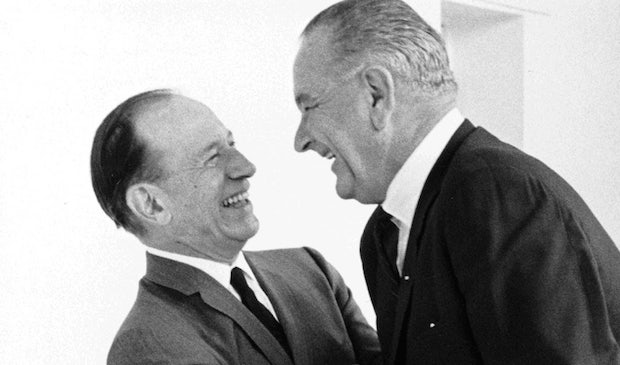 Visitors to the Lyndon Baines Johnson (LBJ) presidential library in Austin, Texas get to have their photos taken against a life size photo of the 6’ 4” LBJ leaning over them, appearing – figuratively – to bend them to his will. It is called “The Johnson Treatment”.

The original photo featured LBJ’s soon to be US Supreme Court justice Abe Fortas. It is just one of many photos of LBJ applying the eponymous “treatment”, once described by the pre-eminent Washington political columnist, Mary McGrory, as “an incredible, potent mixture of persuasion, badgering, flattery, threats, reminders of past favours and future advantages.”

In a fascinating interview at the John F Kennedy library, LBJ’s speechwriter (and husband of the great presidential historian Doris Kearns Goodwin), the late Richard Goodwin tells how LBJ worked his “treatment” on the segregationist governor of Alabama, George Wallace after the Selma marches. Wallace had come to the White House, Goodwin recounts: END_OF_DOCUMENT_TOKEN_TO_BE_REPLACED

While surfing the internet I came across this little nugget: Lyndon Baines Johnson’s “Rules of Life”.

The ebullient LBJ was a larger than life character who contemporaries described as highly driven, ambitious and devoid of any interests or past-times outside politics.

Though mainly remembered now as the President who even further embroiled the US in the Viet-Nam war (a policy he inherited from JFK) too many forget his personal campaign for massive social reform, entitled: The Great Society. You can find the text of LBJ’s first Great Society speech here