As I mentioned in the earlier post, I decided to run a 2-day Twitter Poll on government formation on foot of my latest Broadsheet.ie column.

The wisdom of crowds:
Wisdom of Crowds concept was popularized by James Surowiecki in his 2004 book. It is the idea that large groups of people can be collectively smarter than individual experts when it comes to predicting outcomes. Rather than asking individuals what they wish to see happen, you ask what they think the crowd will collectively do.

In terms of a second general election versus some form of  government with Fianna Fáil, Fine Gael and Independent alone or PLUS either Greens or Labour, the numbers are:

I have produced the results in PDF format:   Government Formation Twitter Poll

I wrote this column for Monday’s Broadsheet.ie it again looks at where we are on electing a new government and concludes that it is still the best part of a month away, despite the hype and spin. I decided to run a two day twitter poll to establish what people there fely was going to happen (as opposed to what they personally hoped to see happen). I will post the results on this page shortly. 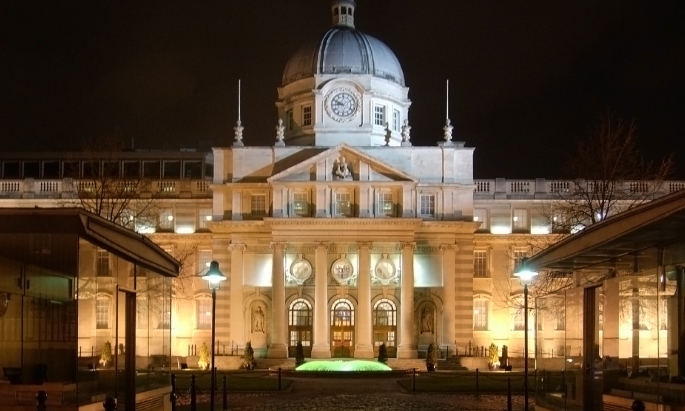 According to the headline in last Friday’s Irish Times: Fianna Fáil and Fine Gael are close to agreeing a coalition framework document.

I am sure they are. Comments from the two party leaders confirms this. The Taoiseach has said the document should be ready within a week or two. Mr Martin said it could act as a “catalyst” for other parties to join such a government.

Yes, the parties have made some progress, but there is still a long way to go before there will be a government in place. The optimism exuding from Fianna Fáil sources last week that a new government could in place before the end of April with Martin as Taoiseach, was… to put it at its mildest… a bit premature.

Let’s look at the facts. Together Fianna Fáil and Fine Gael have 72 Dáil seats. If everyone votes, 80 is a bare majority. Realpolitik – something Micheál Martin was talking about a few weeks back – dictates that any government hoping to last a full term have a majority that is northwards of 80, preferably in the mid 80s. That or a confidence and supply agreement with another big party, but let’s not go back there, just yet.

END_OF_DOCUMENT_TOKEN_TO_BE_REPLACED

I wrote this piece on Sunday Feb 2nd and it appeared on Broadsheet.ie on Monday Feb 3rd. It was written in the immediate wake of a series of national opinion polls showing Fine Gael slipped further back and Sinn Féin advancing further to either tie with, or pull ahead of Fianna Fáil.

This column looks at the various possible government formation outcomes. I explain why I do not see either a Fianna Fáil/Fine Gael grand coalition or a Fianna Fáil/Sinn Féin coalition as likely. I conclude that the most likely outcome is a Fianna Fáil/Green/Other coalition (probably a minority govt), though it will take weeks, if not months, to negotiate and agree. The only alternative to that is another election.

I assume, for this coumn, that the polls are broadly correct, but that they both slightly underestimate Fianna Fáil’s support and slightly overestimate Sinn Féin’s.

Success has many fathers, defeat is an orphan. As true as this is in sports, it is an absolute certainty in political campaigning. Have no doubt that all those fine young marketing executives who told their colleagues over Christmas how remarkably close they were to the Taoiseach and Fine Gael, now struggle to remember just who Leo, Eoghan or Simon might be.

In the words of the great yellow rose of Finglas, Jim Tunney, there are too many folks around politics who opt to buy their colours coming out of the match, rather than going in.

So, before I look at the events of the last few days and attempt a feeble look forward to what may be to come, let me raise a glass to toast those in all parties and none who are sticking by their party and candidates, despite the polls.

END_OF_DOCUMENT_TOKEN_TO_BE_REPLACED

This column first appeared on Broadsheet.ie on Monday Nov. 25 – 4 days before polling in the by-elections in Cork North Central, Wexford, Dublin Fingal and Dublin Mid-West. Here I predict two wins for Fianna Fáil (Wex and Cork NC) on each for the Greens (in Dub Fingal) and Ind (Gogarty) (in Dub MW).

Shortly after he was appointed Conservative Party chairman, Kenneth Baker was presented with internal polls showing the Tories facing near annihilation in the following year’s Local Elections (1990).

The Poll Tax recently introduced by the Tories was not just unpopular, it was hated. There were angry, mass anti-poll tax protests across the UK, in the run-up to the May 3rd polling day. The biggest, in London, turned into a riot with over 300 arrested and 113 seriously injured.

Against this febrile background and with the knowledge that the Tories were going to lose big, Baker set about putting one of the finer political skills into operation: he managed expectations.

END_OF_DOCUMENT_TOKEN_TO_BE_REPLACED

This, according to Eamon Ryan, is how the late Séamus Brennan greeted the Green Party team as it arrived in Government buildings for the 2007 talks on forming a government with Fianna Fáil.

It is a phrase that every Labour Party TD calling for a renegotiation of the Programme for Government (PfG) should print out and place at the top of their PC screen.

God be with the days when Labour recruited its Dáil candidates from the old ITGWU or FWUI. Those guys knew the first principles of negotiating; they particularly knew that you did not go into negotiations unless you had 1. A strong hand and 2. A fair idea of the outcome. Yet some in Labour are advocating that they enter talks with neither.

They want to enter a renegotiation of the government’s fundamental policy programme at precisely the moment when their party has hardly ever been weaker. Do they seriously expect that their senior partners in Fine Gael will take pity on them and offer them major policy concessions just because they are having a bad hair day?

Do they really underestimate their government partners that much?

Politics is a tough world guys. Wake up.

You do not get your way in politics just because you mean well, you get your way and get policies implemented by getting a mandate and pursuing your goals assiduously.

You certainly do not enter talks with partners from whom you wish to extract concessions with the message: we are in a weakened state and desperately need to give the impression that we can beat you into submission, so please, please, please let us.

It is the equivalent in nature of a lone deer asking a lion to not to devour them as they have a leg injury and cannot run properly today. Indeed it goes further and suggests that the lion should agree to allow the injured deer to bitch slap them around for a while so that any other deer who may be watching from a distance will think more highly of them.

There is no compulsion on Fine Gael to enter meaning renegotiation talks with Labour. They know Labour cannot cut and run now and risk facing the electorate, so they know it is strapped into this arrangement until the bitter end. The very most Labour could hope to get is a sham negotiation where we see TV clips of the pairs of Ministers from each side entering Government buildings for late night talks and the last minute “leak” from a source “close to the Labour leadership” saying the talks are at a crucial point right now and may go well into the night. The optics will look good, they may even fool a few activists, but most others (including the public) will see it as just a gesture. If the guys want to go down this road there is doubtless a battered old playbook for such an exercise laying around Government building somewhere.

The current cohort of Fine Gael TDs is possibly the most right of centre since the late 1950s. They are already getting flack from supporters and voters for the appearance that Labour is dictating too much of the government’s agenda, particularly on social issues, so they are neither motivated nor minded to give any more policy ground to them on the back of what was a bad day for Labour and, conversely, a good day for Fine Gael.

The idea of renegotiating the PfG is at best: naïve, and at worst: dumb.

That so many TDs would advocate it after only two years in office suggests that we are probably beyond the mid point of the life of this government and that the chances of there being a general election in early 2015 just got stronger.