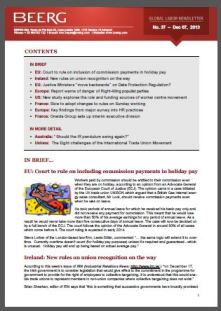 Despite months of discussions among officials and experts from the member states; Ministers were still unable to reach a consensus on the detailed operation of the “one stop shop” principle central to the Regulation. The issue, just one of several still to be resolved, is now pushed back into the forthcoming Greek EU Presidency, due to run for the first six months of 2014.

After the meeting Commission Vice President and Justice Commissioner, Viviane Reding seemed unable to hide her frustration at this further delay, saying

“…we have moved backwards… Instead of seeing the wood for the trees Ministers got bogged down in details with the solution that even after three months of discussions on the one-stop-shop principle there is still no workable solution on the table.”

Her comments contrast with those of the current Chair of the Council of Justice Ministers, Lithuanian Minister of Justice, Juozas Bernatonis who said:

“We prefer a strong agreement to a fast one, and must work to ensure a proper balance between business interests and fundamental rights of citizens.”

The EUObserver.com website later cited an EU diplomat as saying that Germany, with the support of Sweden and Belgium, was partly responsible for the delay adding that Berlin does not want the EU law to be any weaker than its domestic one. Other countries are said to have problems with the actual operation of the systems, believing it to be overcomplicated.

As currently drafted the “one stop shop” principle means that when activities of the undertaking in the EU takes place in more than one Member State, the obligation for cooperation with national data protection authority would be limited to the authority of the main establishment of that undertaking.

As we have previously reported here, Commissioner Reding has spent most of 2013 attempting to railroad the Data Protection Regulation through the EU with a minimum of discussion on the detail, particularly the unnecessary burdens and costs it will create for businesses, large and small, across the EU. Reding’s target was to get the Regulation passed before the current EU parliament and Commission mandates finish in mid-2014 – just in time to further her ambitions to become the next Commission President

While she had some success in speeding up its passage through the Justice & Civil Liberties Committee (LIBE) in the European Parliament, her tactic has not worked with the member state governments. Both the Irish (Jan – June 2013) and Lithuanian (July – Dec 2103) Presidencies have focussed on the detailed operations of her proposal as worded.

Their insistence on fleshing out the implications of the draft Regulations many complex provisions have not only stymied her April 2014 timetable, but perhaps also her own personal ambitions? Could this account for her attack on those Ministers yesterday:

“I wonder how Ministers will face citizens back home, who are calling for stronger and uniform data protection rules in Europe? But fortunately this is not a question that I have to answer.”

With her Commissionership looking certain to end in 2014, it is likely a question she will soon not be around to answer.