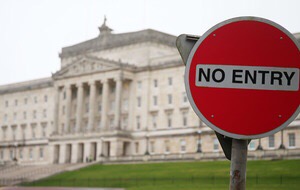 Here is a worrying thought with which to start your week: in two years’ time, we will look back at these last few weeks with fondness and regard them as the last period of stability and calm before the storm.
Not a nice prospect, huh? Yet it is entirely possible that two separate but related and linked events due occur over the next month could throw us into several years of instability and confusion.

The first, and more obvious, of the two events is the triggering of the Article 50 Brexit clause by the British Government. This may happen at the March 9th EU Summit in Malta, though the UK’s Brexit Minister recently hinted that they may wait until later in the month, either way it is certain to happen before the end of March.

We already know how costly and disruptive this will be for us here. But a second event, due to happen later this week, could potentially make what would have already been a difficult situation considerably worse.

That second event is next Thursday’s Northern Ireland Assembly election.

Most commentators and pundits believe that the result after the election will broadly be in line with the one before it. The issue at stake at this Thursday’s Assembly election is not who gets what number of seats but rather whether the Assembly voted in next Thursday has the political will to elect a First and Deputy First Minister and return to operation.

The issue is even more clear cut than that. Will the DUP and Sinn Féin have the political will and backbone to take the result and make it work or will they both continue to play the vapid and empty orange and green politics that we have seen them engage in for the past few weeks and months.

While each side will point the finger at each other in the classic Northern political game of whataboutery – they are equally responsible. Arlene Foster’s partisan intransigence is matched by Sinn Féin’s opportunist disruptive-ism.

Both parties cataloguing of the other’s transgressions and insults from the past is very hard to swallow when you consider that it is barely three months since the then First and Deputy First Ministers, Arlene Foster and Martin McGuinness penned this joint article for the Irish News setting out how well their two parties were working together, stating:

Our two parties are now in an Executive facing in the same direction. We made promises to voters that we will keep – taking on the heavy responsibilities that come with elected office, governing in their best interests, tackling head-on the tough decisions. Others decided to duck the challenges and retreat to the Opposition benches. That is a matter for them…. We are in this for the long haul.

That was on November 21st last – the long haul is not as long as it used to be, especially when there are political points to score. Their delight and bonhomie may also explained, in part, by the ease with which they had happily carved everyone else out of the picture a year earlier in the ill-named Stormont Fresh Start deal.

Right now, we are looking at a suspension of the key institutions established under the Good Friday Agreement: The Assembly and the Executive for a period of perhaps six months, or even a year.

So, we enter a major negotiation on our neighbouring island (sometimes known as Great Britain) exiting the EU at a time when Northern Ireland – whose status and future in those negotiations is a key interest and concern for us – is set to enter a period of political instability.

Not that you would know this from listening to anything coming out from either Dublin or London. Rarely have the two sovereign governments been less prepared and less well equipped to handle, never mind resolve, a crisis in Northern Ireland.

Here in Dublin, the political side of the government machinery is more focused on its internal machinations and the leadership of Fine Gael. Neither of the two main contenders for the Fine Gael leadership have ever exhibited much interest in the North or the Good Friday Agreement, though on this score FG is consistent as our current Foreign Minister, Charlie Flanagan, is more disinterested in the North than most.

While the political side of government is in a state of bewilderment, the institutional side is at least watching what is going on, though it is tough to do this while straining to find the resources to deal with one of the most complex negotiations we have ever conducted with the EU.

Meanwhile, across the sea Theresa May’s government is focused, nay fixated, on the Brexit negotiations and finding a way not to (a). bankrupt their economy by cutting it off from its biggest market and (b). end the Union by disregarding the clearly stated will of the people in Scotland, Northern Ireland and central London.

Coupled with this Prime Minister May has landed Northern Ireland with a Secretary of State who is disinterested in dealing even-handedly with the parties there or even following events in Northern Ireland.

This does not augur well.

The problem is not merely that the Irish government is going to have deal with two major simultaneous political crises – Brexit and suspension of the institutions in the North – but that the discussions in Brussels and the issues in Belfast are considerably intertwined and each exert pressures on, and creates stresses under, the other.

Add to this the potential for even greater destabilisation within the United Kingdom as the Scottish government increasingly moves towards a second independence referendum and you have a mix for a highly volatile and difficult situation not just within Northern Ireland but across this and the neighbouring island.

One of the great strengths of the Good Friday Agreement as negotiated by Bertie Ahern and Tony Blair is that it recognised that the tree strand nature of relationships on these islands. The first strand was the internal relationship between the two communities in the Six Counties. The second was the North/South relationships between the North and the remaining 26 counties of the Republic. The third is the east-west strand between the British and Irish Governments.

One of its weaknesses is that it set these in the context of our mutual membership of the EU, but did not explicitly recognise this underpinning fact anywhere in the text.

So, there you have it. We are about to face into political problems whose complexity and duality are of Heisenberg Uncertainty Principle dimensions and all we have to tackle them is a choice between are two primary school science teachers. Worrying… isn’t it?

One thought on “#Brexit and a suspension of NI institutions – a Heisenberg Uncertainty sized crisis? ”