This column appeared on Broadsheet.ie on November 28th just before the Taoiseach, Leo Varadkar bowed to the inevitable and accepted Frances Fitzgerald’s resignation as Minister for Justice: 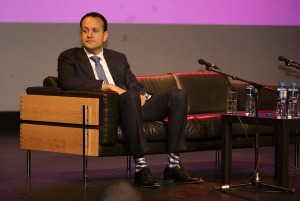 At the end of my last Broadsheet piece I said that the Taoiseach:

“…still has one last opportunity to somewhat redeem his reputation by taking some right steps now.”

At the time of writing this, it appears that the Taoiseach remains doggedly determined not to take the steps needed to diffuse this ministerial-made crisis.

While sacking an old and valued colleague is not a pleasant task, it comes with the job. He is the Taoiseach, he hires and fires. He is also a politician and it must have been obvious to him since Friday that the mounting evidence of Frances Fitzgerald’s failure to act meant that that Dáil Éireann could no longer have confidence in her as Tánaiste or as minister.

So why his slowness to act? Why insist, right up to the eleventh hour when all bar a handful of people around him realise that her goose is cooked, that a general election is preferable to her resignation? Why is there such a determination to deny her accountability and responsibility to the Dáil – a Dáil in which Fine Gael holds less than one third of the seats.

Whatever else happens today – whether the Tánaiste resigns or is sacked or whether the Dáil votes on her fate or not – one thing is clear, Fine Gael’s attempt to ram the Tánaiste unscathed through this crisis by deploying Trump-esque campaign tactics has not worked.

Compare and contrast the comments of Fine Gael spokespeople yesterday and last Friday, it is not simply that the tone has changed, so too has underlying strategy.

Take last night’s RTE Claire Byrne Show and the exchanges between Fianna Fáil’s Jim O’Callaghan and Fine Gael’s Simon Coveney. At one point, Minister Coveney went out of his way to acknowledge that Fianna Fáil was not being unreasonable and that he “accepts” their call for political accountability. This was accepted, in turn, by Jim O’Callaghan who then reminded Coveney that he had dubbed Fianna Fail as “reckless” the previous Friday. While Coveney protested that this was not the case, it was. Indeed, he went a lot, lot further.

Speaking on RTE’s Morning Ireland on Friday, Minister Coveney said Fianna Fáil was trying to bring down the government for “political party reasons”, adding “This is reckless politics that is politically opportunistic to damage a Taoiseach…”. Both quotes from the Irish Independent.

Not that Coveney was the worst exponent. Fine Gael ministers, TDs, trolls and bluebots (the FG equivalent of Shinnerbots) were at it the entire weekend. Listen to Minister Michael Ring debate (or should I say rant) with Stephen Donnelly on Friday’s RTE Drivetime for a example of the tactic at work, albeit ineffectively.

FG sent out the message that Fianna Fáil had tabled its motion of No Confidence in Frances Fitzgerald because it just wanted to cause an election. This despite the fact that the Taoiseach told RTE’s Six One News on Friday that he accepted that Fianna Fáil did not want an election, saying: “I don’t believe Micheál Martin wants one [an election] either, by the way…”

Not that this mattered. No sooner was he back in his state car than the Fine Gael talking points were being churned out saying that Fianna Fáil was only doing this because it wanted an election – something already denied by an Taoiseach.

Was this an attempt to undermine and deny what he Taoiseach had said?

No, of course it wasn’t.

It was the same facts don’t work campaign tactic as used by Trump and by Brexiteers: say whatever you need to say, even when you know its false and misleading, to switch voters your way. No matter that your leader said something else… just get your claim out then and then repeat, repeat and repeat.

This is way beyond the spin we have seen this government engage in since 2011 or even the political dissembling of old. This is not just a desperate tactic you use to get yourself out of a tight-spot, it’s the baseline strategy. Ignore facts and just accuse. Last weekend it was wall to wall on broadcast, print and online media.

It wasn’t just limited to Fianna Fáil’s motivation. When it came to Brexit, no claim was too outlandish. During his Six One News interview the Taoiseach made it clear that if there was to be an election that he would prefer to have it before Christmas saying: “If we have an election, I can still attend the EU Summit with the full executive and constitutional office and powers of Taoiseach on the 13th and 14th of December”.

Clear enough then, the Taoiseach did not feel an election in December (an election he said that neither he nor Martin wanted) would impede or reduce his abilities to negotiate on Brexit at the December Summit? So why were all his Ministers screaming about Fianna Fáil undermining the national interests on Brexit at this critical time in advance of the make or break December summit on which all our futures rest?

The simple answer is because that is what they were told to say, by the same people who helped the Taoiseach prepare for that interview. It was on their talking points – raise public fears and doubts.

By the way, the Taoiseach went much further on Brexit and the December EU Council meeting. He not only said that he was satisfied that he could attend the December summit with full authority, he then went on to downplay its singular importance adding that “…it is not all going to be sorted in December, there will be another summit in February”.

While their strategy did garner Fine Gael a lot of coverage and did succeed in whipping up public concerns on election, it did not succeed in its primary objective: saving the Tánaiste from Dáil accountability. That alone is a good result.

To cite a 2014 Department of Public Expenditure report on government accountability: while the democratic and constitutional imperative, as codified in the Constitution and legislation, requires a government to be politically responsible to parliament for the activities of departments and ministers, it is particularly the case where the minister was personally involved. In other words, this is not a case of a Minister taking the wrap for misfeasance or nonfeasance by officials, this is about personal ministerial responsibility.

Whatever her failing and misjudgements, and I think the trickle of Department of justice emails shows there clearly were oversights, I am sorry to see her political career come to an end this way.

Having been there, in the thick of it, when a minister had to resign, I know how much personal strain and pressure she and her team must be enduring. We put our senior politicians through far more stress than is necessary or, at times, bearable. We expect them, and those around them, to endure huge intrusions into their lives and just accept a range of claims and accusations and then we wonder why it is so difficult to attract he best and the brightest into public life?

Hopefully, we will come through today without the Taoiseach taking any more wrong steps, including ones to the Áras… but that the decision rests with him alone.