The Guardian newspaper asked me for my quick analysis of the Irish abortion referendum results. My comments appear on their live blog.  Below is a fuller version of my comments, including a link to what I believe was one of the most perceptive (and overlooked) tweets on the campaign. 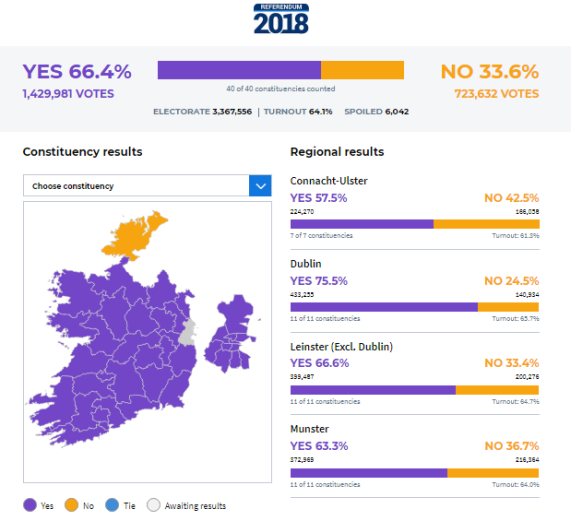 “A landslide. To call the scale and extent of the Yes vote anything else is to way understate and underestimate it.

While most people saw a Yes majority coming, very few – and this includes the pundits and commentators – forecast anything on this scale.

The general assumption right up to the last week was that the Yes would win decisively, with a comfortable margin, leaving the No side in the low 40s nationally and tipping just over the 50% mark in the western, more rural constituencies.

Not for the first time the voters proved the pundits wrong. What is irksome is that this was predictable. If the political analysts had just listened closer and believed what they were seeing and hearing, we would have seen this coming.

The reality of today’s result as demonstrated in the Exit polls is there was no last-minute shift, the movement to Yes had happened long before the first posters hit the lampposts.

Many traditional, middle ground voters – including those who still see themselves as pro-life – decided some time back that it was time to take the issue of abortion out of the Irish Constitution.

The best description I have seen of what happened appeared in a Tweet from @LeifB73 a few days back. It said:

This is so perceptive. This referendum was about nuance – and Irish voters showed that they get nuance. So do voters in most countries. They understand that very few issues are simply black or while. They can grasp and appreciate the nuances when given time and information needed.

Many voters, including those who had real qualms about some aspects of what the Government proposes in the legislation that will follow this referendum, accepted the nuances and the complexities. They considered them and, on balance, they accepted the case for repeal.

This is the seismic change that has happened in Ireland today. In a world that seems destined to rush to this or that easy populist position, Irish voters took the time to inform themselves. They listened to the expert opinions from all sides and weighed the arguments.

The political system afforded them that opportunity by having a long pre-campaign period where arguments, for and against, were calmly made.

If only the Brexit referendum had been handled so calmly and sensibly?