This  Broadsheet.ie column comes from June 29th.  It is a bit more personal than usual as it explains why I decided to resign from Fianna Fáil, the party I first joined back in 1978. Some suggested that I should allow my membership to lapse, rather than resign… but, as I have been a lifetime member since 2016, dropping dead appeared a lot more cumbersome than just sending an email saying: “I quit” 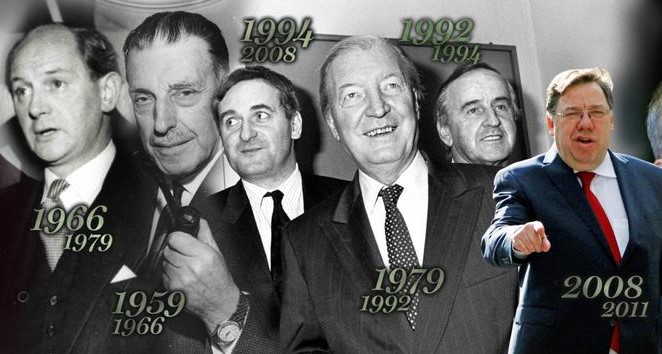 Last week I suggested there was a possibility my Fianna Fáil membership could come to an unseemly and abrupt end for daring to challenge the leadership orthodoxy on the Programme for Government (PfG).

I wrote that particular section with a tongue (my own, I should point out) firmly planted in my cheek. The observation was at best, flippant and at worst, facetious. It was not intended as a prediction. More than once I was just a click away from deleting the entire paragraph as I tried to edit 150 words out of the piece.

Little did I imagine as I hit “send” that that one week later I would find myself no longer a member of the party I joined over 42 years ago.

Let me clear. I am not in this position because anyone asked, cajoled or compelled me to leave, but because I decided by myself and for myself that my time in Fianna Fáil had sadly come to an end, for now.

As is often the case with significant personal decisions it was not down to one single cause. Instead it was a confluence of mixed and varied elements that were finally tipped over on the scale by a seemingly harmless comment.

The most obvious element in this mix is my opposition to the Programme for Government (PfG) and the government formation configuration it sustains. I have written about my objections to and difficulties with the PfG several times, so they are were rehearsed here. Suffice to say that I favour either a national or unity government model for two year period to do with the crisis.

It is why I campaigned for No in the Fianna Fáil member’s ballot and why I voted No. sadly, I and my colleagues only managed to convince 26% of our fellow members to do likewise. While this No percentage is a considerable multiple of the percentage within the parliamentary party, decisions are made by those who win, not by those who most improve.

This defeat itself was not sufficient to persuade me to leave. Just as the abject failure of the party leadership to grasp the opportunities presented by the partnership agreement with Colum Eastwood’s SDLP also failed to drive me out – though I have to concede that did bring me perilously close to departing.

The bizarre and odd straw that broke this contrary camel’s back came via an appearance on last Friday’s 6.01 news by the now Taoiseach, Micheál Martin. He was there to speak about the expected announcement of the Fianna Fáil membership vote.

Answering a question about the mandate for the program for government within Fianna Fáil Martin spoke glowingly about respecting the people who had campaigned for no within the FairerFuture group. A group of which I was a member.

Dismissing the interviewer’s impudent description of our group as dissident, Martin said there had been a “very energetic debate” at all levels of the Fianna Fáil party, hailing the process as proof that “democracy in our party is alive and well.

It was this throwaway comment that saw me off the premises. It is one thing trying to fool yourself and those on the side lines, but it is another one entirely to try to fool those directly involved.

Winning an election gives you the right to pursue your agenda, it does not confer the right to rewrite the story of the process and to cast everyone else in the roles to which you wish they could be assigned. (You wait until you are appointing Cabinet and Junior Ministers and to do that – but that is another story).

I will not recite a litany of real and perceived problems with how the party hierarchy responded to our campaign. Some are too complex to neatly sum up in a few words, others are petty and juvenile. The bottom line is that the current Fianna Fáil leadership seemed truly incapable of grasping the idea that there could be an alternative interpretation or analysis of the PfG, other than its own.

It seemed that the party bosses could not comprehend a scenario where any case other than that favoured by the leader could be argued or presented.

I have no doubt that their outlook contained no malice. They had no problem in seeing that members had an absolute right to say No, it was just that they could not see how or understand why anyone else in the party might be granted use of the party machinery and apparatus to present a counter argument to the leadership orthodoxy.

It is an approach that puts cohesion and solidarity above all. There’s “us” and only “us”, as if no “them” can be allowed to emerge. The fact that this benefits the current leader and his coterie is just coincidental.

It is a false notion of party unity that undermines the purpose and rationale of a political party. The fact that the leader goes on TV and radio and hail this una versione notion of internal democracy in an earnest and genuinely sincere manner is a signal to me that its time to hop the fence.

Let me digress here slightly. The Una Duce Una Voce stuff was never the reality. Not only does the phrase come from a joke that backfired at an off-the-record press briefing, but there was always an alternative focus of opinion to the great leader within Fianna Fáil.

Yes there was Haughey holding centre stage and making sure the lights and microphones were focussed on him and the occasional loyal spear carrier, but there was also a Colley or an O’Malley waiting in the wings, eager to supplant him. There were two sides to all issues and arguments. This made things difficult and fraught as the battles were more often about personality than ideas, but even so a genuine policy debate could break out, the odd time.

Today’s institutionalised reluctance to encourage open debate is also to be seen in how the parliamentary party was asked to approve the PfG. Most Fianna TDs and Senators only got the document about two and a half hours before they went into a parliamentary meeting. This surely is the political equivalent of going to buy a car only to find the salesperson has covered the contract with their jacket and insists you sign through the buttonhole now.

So what, says you, weren’t they being kept updated on what was in it all along? Seemingly not. The parliamentary party meeting immediately before that one was five weeks earlier. It was conducted by phone conference, as if Fianna Fáil TDs don’t possess Zoom, and was later described to me as more like listening into a broadcast than participating in a meeting.

So, here I am outside Fianna Fáil, but with no desire to join any other party instead (sure who in their right mind would have me?). It is quite possible, indeed it is highly likely that I will return to Fianna Fáil at some point in the not too distant future when the party hierarchy and apparatus has rediscovered and reconnected itself to the worth and value of having open debate and contrary opinions within a political party.

I am perhaps being unfair to our new Taoiseach, Micheál Martin, in supposing that such a development will require a change of leadership.

But I must go by the evidence of my own experience over the past few years – and that tells me that this situation is not going to improve or change under Martin.

I am not comfortable with the situation in which I find myself, but happy with my decision. Now I can test the validity of the transposed Aussie political claim (substituting FF for ALP) that says: “You haven’t really been in Fianna Fáil until you have been drummed out of it… at least once”.