Winston Churchill famously said that the United States always does the right thing – but only after exhausting all other options. If only the UK were somewhere near that point.

But it is not, it is still fumbling through just a few of the worst possible option while closing its eyes to the only right option now, revoking Article 50.

Theresa May’s speech last night was a disgrace. She appeared before the public with all the trappings of office, but with none of its authority. She tried to act like an authoritarian, an unpopular populist telling a divided public that it’s you and me against the others… against all those MPs stopping us from doing what we must do.

It was like a very bad live re-enactment of the disgraceful Daily Mail November 2016 front page that branded those judges who ruled that Parliament must be consulted on Brexit as: Enemies of the People.

It was a shocking performance and it is to be hoped that it is the one of the last acts of a British Prime Minister who may still be well intentioned, but whose continuance in office remains a blockage to any progress.

END_OF_DOCUMENT_TOKEN_TO_BE_REPLACED

Today’s column was written for Broadsheet and appears there as “what does Leo really know?”

‘What did the President know and when did he know it?’ is possibly the most famous political question of the late 20th century. It was asked, in June/July 1973, by Senator Howard Baker during the US Senate’s Watergate Hearings.

Though we tend to forget it now, Baker framed the question in the hope of protecting his fellow Republican, President Nixon. But as the White House’s defence collapsed it came to sum up the depth and extent of Nixon’s personal involvement in the cover-up.

The Baker question popped back into my head last week watching the Taoiseach answering questions on the Irish policy on moving Brexit talks to phase two.

But, where Baker’s question highlighted how deeply Nixon was embroiled in the Watergate machinations, when it is applied to our own new Taoiseach it tends to expose how perilously unaware he often seems regarding what is happening in his own government.

So, what did our Taoiseach know last Wednesday about Ireland’s approach to moving UK/EU talks to phase two… well, according to the Taoiseach himself… not that much. Responding to parliamentary questions the Taoiseach said:

“I am now of the view that it is likely we will be able to say that sufficient progress has been made at the December meeting, allowing us to move on to discussions on transition and the future arrangements.”

END_OF_DOCUMENT_TOKEN_TO_BE_REPLACED

This is my Broadsheet.ie column from August 28th, 2017 – the original appears online here 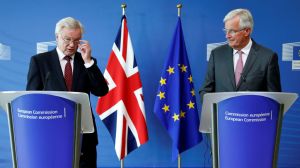 At around 4pm (Irish time) today (Mon Aug 28), British and EU negotiators will meet again in Brussels for the latest round of Brexit talks. The first item on this week’s agenda, we are told, will be Britain’s exit bill, with the Brits expected to set out their thinking behind how they will for calculating how much is owed to the EU when Britain leaves. The teams with then go on, over the following days, to discuss the two other key issues which need to be resolved during this first phase of talks: citizens’ rights and ensuring the Northern Ireland peace process is not jeopardised.

While the EU (by which I mean “we”) set out its position on the British financial settlement back in May, British ministers have been extremely reluctant to attempt to put a figure on it. While some, like Boris Johnson have huffed and puffed about making the EU go whistle for it, the UK’s Brexit Minister, David Davis, has sufficient political nous to see that putting a realistic figure on the divorce settlement will just throw raw meat to the Tory right, who imagine they can use their debt as a bargaining chip for better terms for the future relationship.