This column on whether President Higgins will run for a second term comes from Sept 25th and first appeared online on Broadsheet.ie. 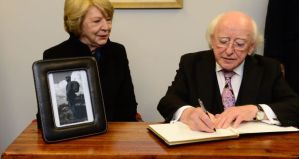 That, of course, is if there is a next one. Though I personally think there will.

If today’s Ireland Thinks/Irish Daily Mail poll is correct, and there is no real reason to assume it isn’t, then 76% of us would like President Higgins to continue on after his first term expires in late 2018.