I wrote this Broadsheet.ie column on Monday March 30th, the eve of the 5 day long count in the 2020 Seanad Election. As I forecast, Fianna Fáil secured 16 seats out of the 43 available on the 5 vocational panels (as it should have done in 2016) and Sinn Féin fell back from 6 to 5 seats, indeed it was within 2 votes of losing another one and falling back to 4 seats. For the first time in decades all six outgoing university Senators were returned.

At midday today the second act of the 2020 General Election drama will start to be played out. At that time, at the Printworks hall in Dublin Castle, Oireachtas officials will commence the process of counting Seanad election votes.

The count, or should I more correctly say counts – plural, are expected to run until Friday evening. They will decide the identity of the 43 senators who will serve on the Seanad’s five vocational panels. (Seanad election infographic here).

The Oireachtas communication team will be posting updates from the count via a special webpage and on social media platforms such as Twitter, Facebook, Instagram and Linkedin.

Updates from the university panel counts, will be found on  the National University of Ireland website and the Trinity College Dublin website.

END_OF_DOCUMENT_TOKEN_TO_BE_REPLACED 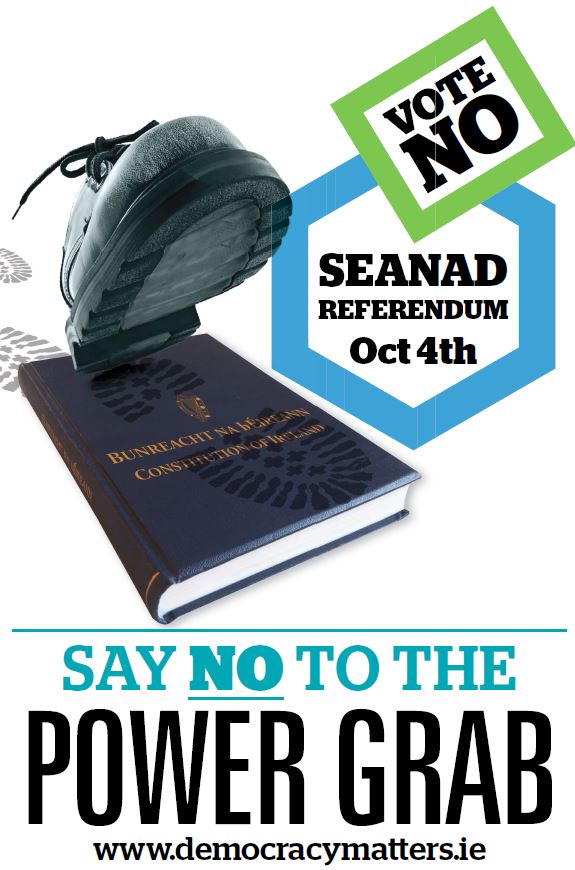 As a firm believer in Seanad reform – and consequently a trenchant opponent of Seanad abolition – the Sunday Independent’s Millward Brown poll showing the No to Abolition side gaining further momentum is gratifying.

The past few weeks have hardly been great for the No side. Fine Gael has been pretty active on the airwaves over the Summer break, while Sinn Féin’s opportunistic decision to campaign for a Yes, having vehemently opposed the Government’s proposal in both the Dáil and Seanad, hasn’t helped the No cause either.

All this makes the increase in the pro Seanad reform level of support all the more re-assuring. Not that the poll suggests that the campaign is done and dusted. Far from it.

More than almost any other, this Seanad abolition policy, is the lone brain child of Enda Kenny. Though there seem to be no research papers, discussion documents or policy positions he can produce to justify the origins of this initiative, he is the man behind it and he has more to lose by its defeat than anyone else.

While Labour nominally favours abolition, its TDs and Ministers can reasonably see their policy obligations as fulfilled by the holding of a referendum. Don’t expect to see many of them working too hard for a Yes to abolition vote. Indeed, as the Labour Chief Whip has indicated, at least half the Labour parliamentary party may actually work for a No vote seeing it as the best way to secure a popular mandate for Seanad reform.

One of the two authors of Labour’s 2009 position paper on Seanad reform, Junior Minister, Alex White has not commented on the issue much, while the other author, Joanna Tuffy TD has indicated that she will be campaigning for a No vote.

The worrying shift in the poll numbers make it necessary for Fine Gael to up the ante over the weeks ahead.
Given that the main shift has been in the group who describe themselves as favouring reform expect to see Fine Gael focus its attentions there and try to convince them that a Yes vote is a vote for reform.

We already had a glimpse of this approach last week via its neophyte Wicklow TD, Simon Harris’s speech at the Parnell Summer School.
Harris advanced the argument that abolishing the Seanad counts as reform and gives power back to the people as it means the single remaining chamber of the Oireachtas: the Dáil will be 100% elected by the public.

Harris’s reasoning seems to hinges on the statistic that the number of people registered to vote in Seanad elections, under current legislation, is around 156,000; about 5% of the approx 3.1 million entitled to vote at the February 2011 Dáil election.

What Harris misses, however, is that this 156,000 (Councillors, Oireachtas members and NUI and TCD graduates) is defined in legislation – not the Constitution. Everyone in the North and South could be given the right to vote with the passing of an Act by the Dáil and Seanad. Indeed the Seanad has already voted for such a piece of reform with the Second Stage vote on the Quinn/Zappone Seanad Reform Bill.
The extension of the Seanad franchise to all is now completely within the gift of Deputy Harris’s colleagues on the government benches.

The only real obstacle to such a real reform is the Taoiseach’s obduracy in insisting on Seanad abolition instead of reform.

Though not central to the argument it is worth noting that the 156,000 figure is probably an understatement as it just counts the NUI and Trinity graduates who have registered to vote. Many 100s of 1000s more are entitled to vote by virtue of their graduation.

The other problem with Harris’s reasoning is the idea that the answer to existing disenfranchisement is more disenfranchisement. It defies all democratic principles to propose removing someone’s voting rights when you have it in your power to extend them.

If you were to apply Deputy Harris’s quirky logic to the campaign for women’s suffrage a century back you would determine that the way to ensure equal voting rights for all was to remove the vote from men so that the two genders were equally disadvantaged.

The very legitimate criticism that not enough people are entitled to vote in Seanad elections is properly addressed by giving everyone the right, not by removing it.

I would hope that Deputy Harris’s espousal of a position that is the absolute antithesis of reform is informed by loyalty to his party leader and desire for advancement rather than by belief in the argument itself.

If it is the former then the case for reform is all the greater, if it is latter then it is time to worry.