If you are thinking of taking a few political books away with you as you wind down in August, then the list below may be of help.

As with last year’s list, the books here appear in no particular order. These are the books that caught my attention over the past few months, including some from the second half of 2017 and one that I wanted to like, but couldn’t.

As this list broadly reflects my personal biases, feel free to offer your own suggestions in the comments section below. Enjoy the Summer and see you back here towards the end of August.

Beyond The Border, The Good Friday Agreement And Irish Unity After Brexit by Richard Humphreys

A timely read, this book by High Court judge and former Irish Labour Party Sp/Ad, Richard Humphreys examines how the structures and principles that underpin the 1998 Good Friday Agreement could work in a post Brexit, United Ireland.

As Humphreys states clearly in the preface, the book is not intended as a political work, but rather as a personal, but academic, explanation of the Agreement and its implications. This he does expertly, with minimal jargon or rhetoric, across seven distinct sections that go from understanding the evolution and architecture of the agreement to getting beyond just working the institutions and arriving at removing the obstacles to unification. Not a light read, it is still a very worthwhile one.

Witness to War Crimes: The Memoirs of an Irish Peacekeeper in Bosnia by Col Colm Doyle

This is no ordinary military memoir, not least because Col Doyle is no ordinary Irish soldier. As defence analyst and fellow army officer, Declan Power, said in his Irish Independent profile of Doyle, “[he] …has gone head to head with presidents, warlords and war criminals in the pursuit of peace.”

Doyle’s memoir is a first-hand chronicle of Yugoslavia’s break-up and descent into mayhem and barbarity. He recounts his role in brokering ceasefires, both local and across the conflict, and in providing much of the expert testimony that helped convict key Bosnian-Serb leaders at the Hague war crimes tribunal.

Doyle’s account shows how little it takes to slip from peace to war, even in the heart of Europe, and how well trained and skilled Irish troops on UN mandated peace support operations can – and do – make a difference.

War on Peace: The End of Diplomacy and the Decline of American Influence by Ronan Farrow

Published months before President Trump’s eh… shall we say colourful… NATO and Helsinki summit performances, Ronan Farrow’s book laments what he sees as the two-decade long decline in America’s civilian diplomacy and cautions against America’s increasing reliance on military and intelligence solutions.

Though now a journalist and writer, over a decade ago Farrow was a lowly State Department official, and so offers more of an “insider” perspective, especially given his early position as an aide to Richard Holbrooke the chief negotiator of the Dayton Peace Accords, which ended the civil war in Bosnia.

While Farrow’s writing style may be light, his treatment of the topic is anything but. He does not skimp on detail or research, so put aside time to read his thoughtful and considered account.

Yes We (Still) Can: Politics in the Age of Obama, Twitter, and Trump by Dan Pfeiffer

If you like President Trump and the way he does business, then this definitely is not the book for you, try either Alan Dershowitz’s latest offering “The Case Against Impeaching Trump” or his 2017 book: “Trumped Up: How Criminalization of Political Differences Endangers Democracy” instead.

However, if you are not a fan and want a chatty, pacey, funny and ultimately optimistic view of how Trumpism can be defeated, then this book by a key Obama adviser and host of the political podcast: Pod Save America, is for you. Pfeiffer explores how America got to where it is today by looking back over the successes and failures of the Obama era. The result is both a highly entertaining read and a roadmap to defeating Trump in 2020.

According to the blurb: “Ctrl Alt Delete is a brutally honest and sometimes funny account of how our democracy was crashed — and whether we can still re-boot it.”

It is one of several books looking at the fraught and difficult relationship between politics, the media, and the new information age, but has the benefit of being written by an experienced practitioner. Baldwin has, at various points in his career, been the UK Labour Party’s communications director and political editor of The Sunday Telegraph. He is now the communications director of the People’s Vote campaign for a second vote on Brexit.

The book is a well-written, sometimes funny, often angry examination of how the vicious battle for control of the news agenda has changed both politics and the media for the worse. Like some other books on this list, it culminates in a warning that democracy itself may be in peril. 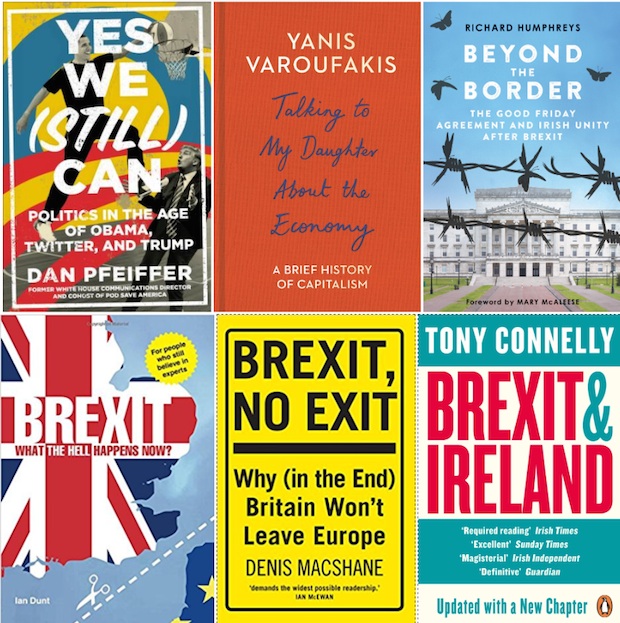 On Tyranny: Twenty Lessons from the Twentieth Century By Timothy Snyder

Continuing the slightly dystopian theme, this short book from 2017 by noted historian Tim Snyder opens with a telling quote from Polish philosopher, Leszek Kolokowski: “In politics, being deceived is no excuse”.

Snyder identifies 20 important and practical lessons from the Nazi and Soviet eras to show how people can be brought to conspire in their own deception, accepting political lies without critical examination when the lie feels right. A handy book to dip in and out of, it is perhaps one to keep to hand rather than reading from cover to cover.

Brexit and Ireland: The Dangers, the Opportunities, and the Inside Story of the Irish Response by Tony Connelly

Without a doubt the “go to” book on Brexit and its impact on Ireland. Well written, thoroughly researched, yet concise it offers a dispassionate analysis and real insight into what Britain’s Brexit folly means for Ireland’s economy and how it will affect British/Irish relations.

While the process has moved on, or should I say stumbled on, since it was first published late last year, Tony’s book is still a vital source and should be read alongside Tony’s excellent RTE Brexit Blog and Podcasts.

Two other Brexit related tomes to consider alongside Tony’s book are Ian Dunt’s 2018 update of his book: Brexit, What The Hell Happens Now?  and Dr Denis McShane’s Brexit, No Exit: Why in the End Britain Won’t Leave Europe

There are several pro Brexit books from 2017 still knocking around, probably in some bargain buckets by now, including ones by Dan Hannon and Liam Halligan, but you won’t catch me plugging them here.

Where several other books on this list have pessimistic undertones, this biography of Macron by The Economist’s Paris Bureau Chief borders on the optimistic, but only just.

The Macron emerging from Pedder’s profile is intelligent, astute, warm – though a bit geeky – and capable of self-criticism. Pedder writes from the vantage point of having interviewed Macron many times since 2012. This was long before his meteoric rise to the presidency or even his emergence as a political figure of note. She charts the progress of a progressive reformer who broke the old French party system, not just by luck but by having the political foresight to see the opening gap and positioning himself and his En Marche movement to fill it.

Talking to My Daughter About the Economy: A Brief History of Capitalism by Yanis Varoufakis

This book comes with the unusual distinction of being reviewed by our very own Varoufakis, Finance Minister, Paschal Donohue. Though Donohue is dismissive of Varoufakis, describing him as hopelessly out of his depth as a finance minister and fleeing for the Greek islands when the going got tough, Paschal still liked the book, calling it “lucid but flawed”. It’s a fair critique as the book does precisely what it says in the title, namely explaining modern economics to a teenager.

Varoufakis is a skilled communicator and engaging writer. He succeeds in finding terminology and cultural references that allow economics be discussed in a way that almost everyone can understand. These range from Greek mythology to The Matrix via an explanation of money supply by looking at how Red Cross packages were used in German prisoner-of-war camps. A welcome read for anyone who had to repeat economics in college, including yours truly.

Things Can Only Get Worse?: Twenty confusing years in the life of a Labour supporter by John O’Farrell

This laugh-out-loud sequel to the equally hilarious “Things can only get better” is, according to the introduction, for those who “could use a good laugh after Brexit, Trump and finding they were governed by the DUP”. It’s a claim the book delivers on, in bucket loads.

Where O’Farrell’s 1998 memoir looked at eighteen miserable years of being a British Labour Party supporter under a Tory government, this one deals with the highs and lows of the two decades since Blair’s 1997 landslide. He robustly defends both Blair and Brown’s record in office, while acknowledging their many failings, and likens the rise of Corbyn to discovering that “your student daughter had just married a very unsuitable older man”.

O’Farrell proves that you can write sincerely about politics and still be funny. It is a genuine belter and – who knows – possibly an inspiration for an Irish version?

And one to miss….

The President is Missing by Bill Clinton with James Patterson

Ok. This one is a stretch. Looking at the list above I saw that I hadn’t included any decent fiction. So, I added this thriller co-authored by Clinton and Patterson and then realised that the list still doesn’t feature any.

As a Bill Clinton fan I was ready, willing and able to like this book. I looked forward to reading the RTÉ’s exclusive extract online, along with the two “look inside” preview chapters on Amazon.

Sadly, they all failed to impress. It is not bad, it is just sluggish and heavy going. The book has been hyped as benefitting from President Clinton’s detail knowledge of the inside workings of the presidency, but it is this detail that slows it down.

The thoughts of wading through 500+ more pages of it defeated me, so use my defeat as a warning and avoid it too.

One thought on “My Summer 2018 @broadsheet_ie political reading list”