Broadsheet 129 – They won’t have a winner some day

“Beyond the Fringe” was a 1960s British comedy revue that was seminal to the rise of British satire… well, according to Wikipedia, it was.

Even if you never heard of the show, you will know its cast. They were: Peter Cook, Dudley Moore, Jonathan Miller and Alan Bennet

The revue had lengthy sell-out runs in London’s West End and Broadway and introduced several classical comedy sketches. One in particular has been coming to mind over the past few weeks.

It opens with a group of obsessive devotees gathering at the top of a mountain. They are counting down to midnight and, they believe, the end of the world. Their shaman tells them of what is to befall the world and assures them that they will be safe. Meanwhile the individual followers sheepishly wonder about mundane things like who brought the tinned food… and the tin opener.

The countdown nears its climax. 3… 2… 1. [Spoiler Alert] There is silence. Nothing happens. Unperturbed, the shaman concedes “this wasn’t quite the conflagration I’d been banking on… same time tomorrow lads, we must have a winner one day”.

And so it is with Sinn Féin, Ming, Daly et al. With the same fixated zeal as the lads on the mountain they are once again predicting the end of neutrality. Mercifully, it is not nighty, though their incantations do seem to come around with a regularity curiously attuned to the electoral cycle.

END_OF_DOCUMENT_TOKEN_TO_BE_REPLACED

In this Broadsheet.ie column I welcome the Irish government’s campaign to win a seat on the UN Security Council, but wonder just who precisely was the target of the high profile launch in NYC…?

While their jaunt was ostensibly to “launch” Ireland’s bid for a seat on the UN Security Council, their real purpose was more domestic.

It was an impressive display.

In addition to these four government members, curiously all of them from Fine Gael, were a former Irish President, the Defence Forces’ Chief of Staff, Bono, U2, a contingent of uniformed Defence Force members and an even bigger contingent of Irish political correspondents.

If UN Security Council (UNSC) seats are allocated on the basis of display, then Ireland should be a shoo-in.

But, UNSC seats are not won by those who just put on the best display.

They are won by years of horse trading and deal making.

END_OF_DOCUMENT_TOKEN_TO_BE_REPLACED 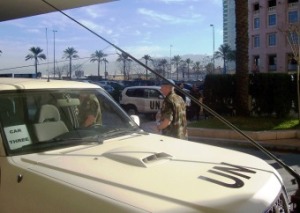 This was written for last Friday’s Evening Herald (January 13th) but, unluckily, did not make the cut.

What is it with some American troops? Why, even in the aftermath of Abu Ghraib and other scandals, do they still seem incapable of acting with restraint and showing even basic common decency?

The video, shown on the TV news last night, of a group of US Marines urinating on the bodies of dead Taliban insurgents once again raises the issue of their suitability to serve on peace support operations outside theUSA.

It is not as if the guys involved were raw recruits or conscripts: these were Marines: the supposed cream of the American military. Their motto: “Semper Fidelis” means always faithful, presumably that includes fidelity to their own three core values: Honour, Courage Commitment.

The Marine Corps manual says of the first value: Honour: “Respect for others is essential. Marines are expected to act responsibly in a manner befitting the title they’ve earned.”

Clearly the actions of the four Marines who appeared on our screens last night fell well short of that. Indeed that dishonour extends beyond the men filmed to include those who gleefully recorded the sorry episode, probably for future broadcast at private gatherings stateside.

None of this can be excused by the stresses and strains of their task or the coarseness of their environment. It is an example of dehumanising of the enemy; of treating those who are fighting against as less than human.

This is not an attitude that can be tolerated. It is not in the Afgahnis interest and neither is it in theUS’s either.

While the Americans serve inAfghanistanas part of a UN mandated NATO coordinated mission, their presence has a greater and wider significance.

The noted American playwright and peace activist Eve Ensler put it best after her 2003 visit to the region: “Afghanistan is a test case,”  “We may never recover the trust of the Muslim world . . . if theU.S.does not deliver security, substantial aid, and reconstruction . . . [and] fulfil our promises.”

Those who support the mission in Afghanistan (and I include myself in that) can point to a number of positives it has already helped achieve: new motorways and buildings; 4 million children now attending school, including many for the first time; a growing economy, a new constitution, and the return of more than 2.5 million refugees.

The action of the Marines not only undermines these achievements, it seriously dents the already precarious support of the Afghan people for the mission’s continuing presence. Their despicable actions potentially put their comrades at greater risk.

This sorry dehumanising episode again raises serious questions about the institutional ability of American troops to serve on peace support or quasi policing operations in regions or communities with different cultures and traditions.

It is not something new. I recall a mid rankingUKofficer recounting his experience with American officers under his command on a multi-lateral mission in sub Saharan Africa. He told me that he had a tough time even getting them to take off their mirrored sunglasses when talking with locals.

He told me of his frustration in having to constantly tell the Americans that this was vital to build up trust with the locals. The local culture demanded that you be able to look into someone’s eyes when they spoke with you. You have to treat those you are there to protect as your equal, not as your inferior – and not as your enemy.

It is something that now comes instinctively to our troops serving overseas. Perhaps this is in part due to our sense memory of being a former colony. We can empathise with the plight of the local communities and the hardship they endure while retaining our impartiality and commitment to our mission.

It is something that can be taught. Significantly it is taught here at the UN Training School in the Curragh Camp. The UN School runs United Nations Military Observers and Staff Officers courses.

While the offending Marines will probably be drummed out of the army, perhaps their senior commanding officers might be sent to the Curragh for some basic lessons in how to get their people to start showing respect.